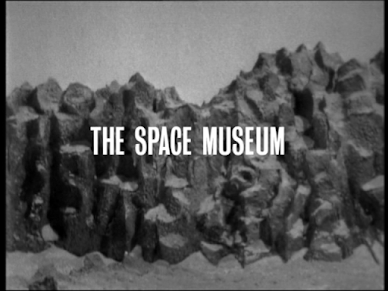 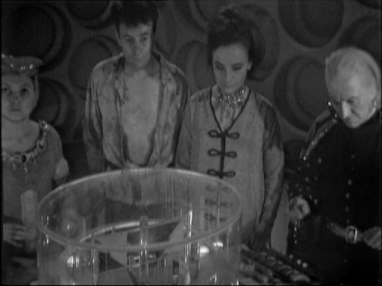 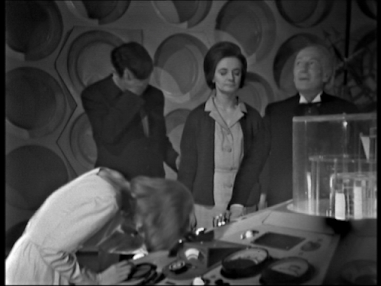 Synopsis
The TARDIS materialises but the crew discover that they're no longer wearing their 12th Century clothing from the last serial, but have changed into their modern clothes, with their former costumes hung up. Looking on the scanner to see where they've landed they see a series of derelict-looking spaceships. The Doctor surmises from their varying types and ages that they must have landed on a planet Space Museum. 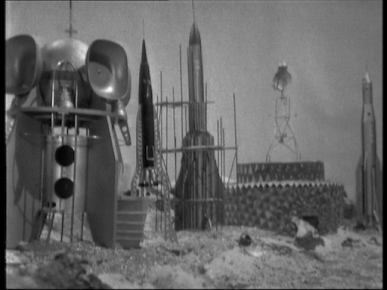 They enter the Museum itself, where they discover exhibits including an empty Dalek, but soon get lost in the myriad corridors. They then find the TARDIS as an exhibit. The Doctor is puzzled by its insubstantial nature, he can physically walk through it. Ian finds his had also passes through objects. But the final shock awaits them - they see themselves, dressed exactly the same as they are now, as museum exhibits too. Is this their future, or can they change it before it's too late, and when exactly does it happen? 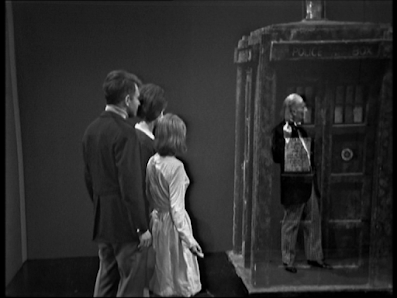 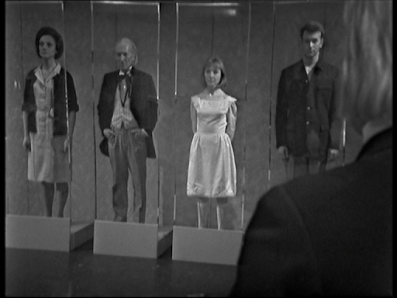 Review
Because of the audience perception (supported by BBC Audience Appreciation Index) of the "silliness" of serials The Romans and The Web Planet, the show had by the time of The Crusade lost 3million viewers, a quarter of its audience. Like The Crusade this had its highest rating for its first episode (both had 10.5million), falling to 8.5million. Of course, nearly all Doctor Who series see a similar mid-season fall, but it's no accident I think that the poor reception for The Romans seems to have damaged the show. People are tuning in for episode one, then  judging whether to watch the rest of the serial, with 2 million appearing not convinced (probably watching the new Lost In Space on ITV). 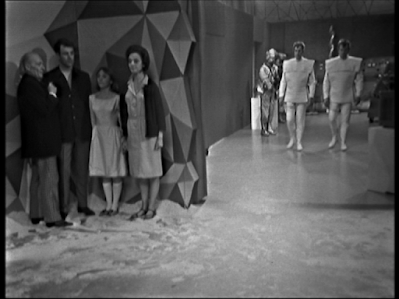 This is a shame as the first episode, entitled The Space Museum, is an intriguing episode, full of mystery, and the final cliff-hanger, where they see themselves in glass cages as exhibits, is brilliant. Really chilling, and of course sets up the problem for the remaining story. How do they know if their actions will change the future, or simply making it come true. 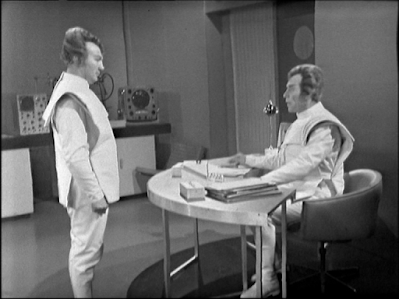 Obviously, the serial mines that old Sci-Fi, indeed philosophical chestnut, Predestination vs. Free Will. Is history merely the unfolding of a story already told in advance, or can we alter our own futures? Of course, it's very obvious to say we make our own future, but remember this is Doctor Who, where our travellers constantly move through space and time, and this serial starts with that shocking cliff-hanger. The Doctor surmises that somehow they've jumped a 'time track', so arrived in the TARDIS before they actually will arrive, hence their ghostly-like insubstantiality, and why the planet inhabitants can't see them, nor can our travellers hear what they're saying. When they do finally substantially arrive, they must try to escape their fates. 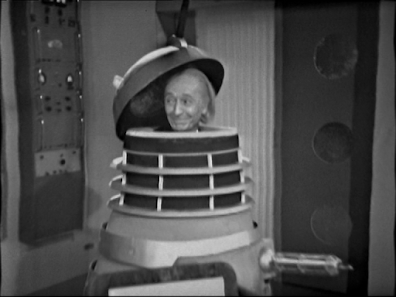 Writer Glyn Jones has fun with their various attempts to avoid capture and thus this fate. Most noticeably when the Doctor hides in the shell of the Dalek. He says (in Dalek voice)  "I am the Master", which like this serial's theme, is  a joke for future viewers, and when his head pops out and he laughs, this is pure comic genius. 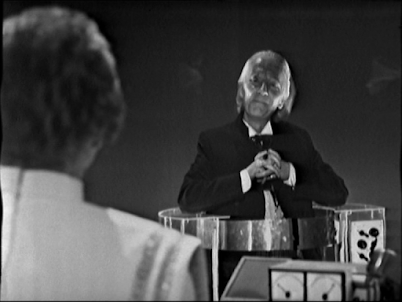 Interestingly, Vicki's part has been written up, much more actively and even gleefully wilful and vibrant. It's she that urges the oppressed native Xerons (the planet is called Xeros, geddit? Xerox as copy) to rise up against the Morok colonialist army that runs the museum and planet. She even helps to reprogramme the entry computer to the Armoury (which only accepts truthful and right answers) so the Xerons can raid it for arms. Not being teamed up with the Doctor, who's caught early and put in cold storage (and on holiday for episode 3), gives her a chance to individually shine, probably helped by acting with the young cast of Xerons. Poor old Jacqueline meanwhile has to put up with another underwritten part. Maureen O'Brien is very good in this serial, and like Hartnell shows a pawky humour. 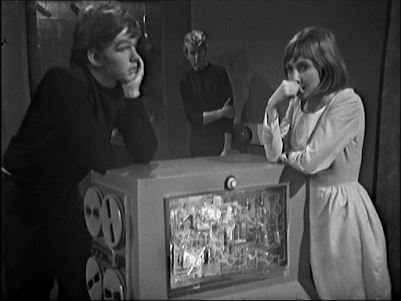 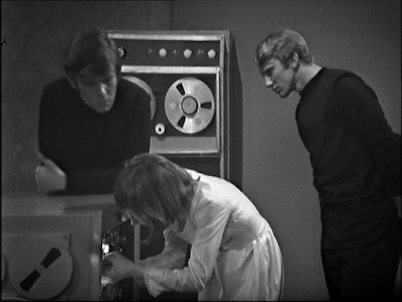 As mentioned earlier, this is a colonised planet, and one of the themes of the show is colonialism, looked at slightly humorously rather than didactically. Richard Shaw is wonderful as the Colonial Administrator. Whenever we see him he's always filling in reports. When interrogating the Doctor, he admits that the Museum was once hugely popular a couple of hundred years ago when th eEmpire was at its height, when tourists flocked to see it, but now they're lucky to get the odd ship from Morok, to which the Doctor replies "decline and fall". 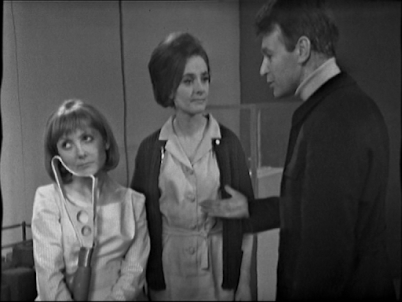 This is exactly what has happened to the once illustrious Morok empire. The administrator is resignedly left with the endless bureaucracy and boredom of running a museum that nobody visits, and who's main task is to ship off the Xeron adults to the various slave labour camps in the Empire, thus even the native colonised population is composed of teenagers and children.
Shaw portrays all the bored tetchy behaviour of someone who knows they've been relegated to an unimportant part of the Empire, ably supported by Ivor Salter as the Commander, constantly threatening to put his soldiers on report for not obeying orders, and quietly disgruntled and exasperated by the poor calibre of his men. It's helped by all the Moroks being middle-aged, and by the soldiers themselves following orders with an almost total lack of enthusiasm. It's also interesting to see in this 1965 serial a theme of Youth revolt v Middle-aged establishment. Since all the adults are shipped off, the Xerons are a very young cast, and in their all black costume of top, jeans, and sneakers, look modishly 1965, whilst the Morok soldiers are not only distinctly middle-aged, but with accompanying middle-aged spread.
The lack of any organised resistance by the inexperienced and leaderless Xerons, has bred in the Morok colonisers a bored, resigned and listless demeanour, knowing they're not on a really important assignment, and probably just marking time until retirement. 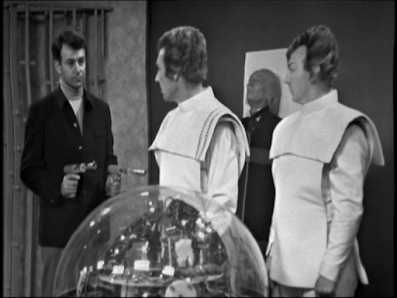 With the impetus of a new vibrant force such as Vicki, the Xerons are able to overcome the Moroks, and for once this is not far-fetched or incredible. All Empires fade when the first imperialist thrust of discovery and conquest is over, and citizens start to want to concentrate on enjoying the fruits of conquest rather than on maintaining security, with the best and brightest preferring advancement to service and duty. This is as true of Rome as it is for the British. 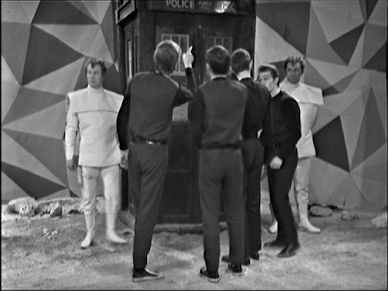 So I'm not convinced at all by the rather poor, if not snotty, reviews this story gets,. It benefits greatly from the short serial length, short episode running times (barely 22 mins each), and small cast. If it's not an all time classic, it's because the 'revolt against tyrants' plot is a bog-standard Who plot. In addition, the imperial malaise drains some of the pace and excitement, and despite the intriguing opening premise, the Doctor's discovery that a faulty piece of equipment caused the time-slip is pat and unsatisfying. Good fun, and in the end scene, the Daleks!
TARDIS rating: 3/5 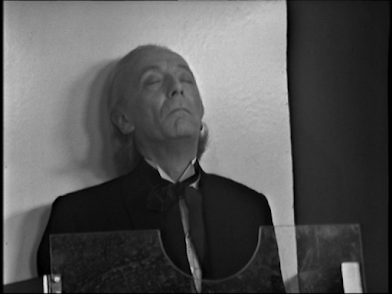 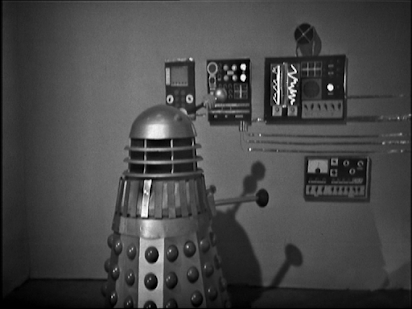