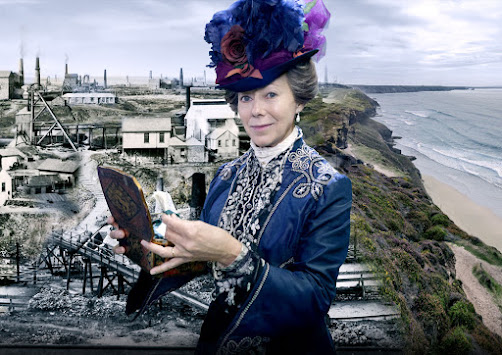 1895. A Cornish tin mine is on the edge of bankruptcy. When a touring light opera company arrives, lead Marjorie Dawson (Jenny Agutter pictured) purchases shares in the mine, but she is the victim of a bank fraud.
What can one say about this woe-begone production. Firstly it's shot on BETA rather than on film, with digital inserted backgrounds, particularly for the interiors. This, and the muted colour scheme (all blues & greys), coupled with the amateur acting, gives this 'film' an unnaturalistic air but yet without the stylistic artistry of say Bill Douglas's own Cornish story Comrades (1987).  Not surprising as Tin is made by a theatre company and an opera company, so not only do we have to suffer amateur dramatics but also Beethoven's Fidelio, two of my bugbears in one film. It shows it's theatrical origins all too obviously.
The film actors, Jenny, Dudley Sutton, give good performances but they cannot save this melodrama. The fraud is not properly explained, and the emotional lives of the townsfolk is poorly conceived, and far too modern in vernacular and tone. Not a film I shall watch again.
FILM JENNY AGUTTER