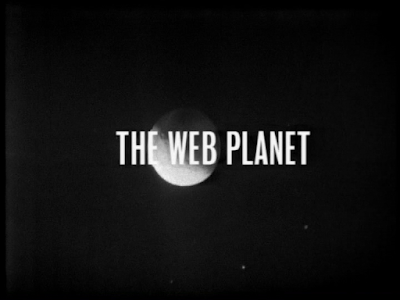 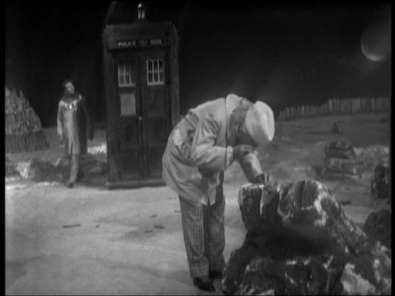 Synopsis
The TARDIS is caught in a force that draws it down to the planet Vortis. The Doctor has been there before but no longer recognises the barren waste with acid rock pools. They discover that the planet has been colonised by a Dark Power called the Animus, who has enslaved the native ant-like species, the Zarbi, and their flame-throwing wood-lice like larvae guns. It's web is spreading inexorably over the whole planet. Meanwhile the original inhabitants, the moth-like Menoptera, are attempting to wrest the planet back, while underground the centipede-like Optera live on blindly. 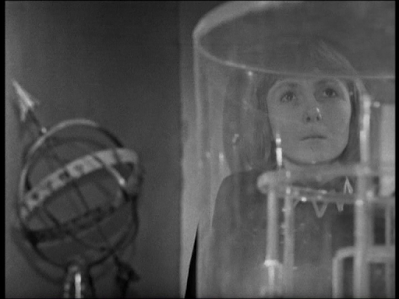 Review
As the above synopsis shows, this was a very bold and brave experiment to show a whole planet's eco-system, with it's four native insect-like species, and a mysterious Dark Power, with a planet-covering web. How on Earth Bill Strutton got his script past Verity I don't know, but it's to her credit that she followed the experimental comedy of The Romans with this. 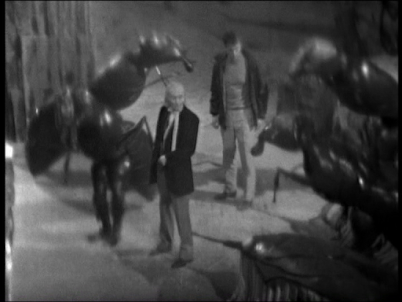 It starts quite interestingly. The atmosphere is a little thin and gravity a little stronger than the TARDIS crew are used to, so the Doctor whips out a couple of Atmosphere Density Jackets for him and Ian. This is a nice touch, sadly this concept wouldn't be used again, barring the space-suits used in The Space Pirates three years later. The Doctor is really scientifically excited by the changed Vortis, and Hartnell plays him as giddy as a schoolboy. Though some of the science is a bit iffy (surely gold isn't magnetic?), there's a nice mystery built up, though the use of  a new camera lens (a sort of light diffuser lens) is more annoying than atmospheric. If it so badly distorts vidcaps in 2021, imagine what it looked like on the average home 12" B&W 405-line TV sets of 1965! And there's  a lovely touch in epode two when Vicki manages to get the under attack TARDIS to dematerialise so that when the Doctor races back to is landing point he finds his ship gone. 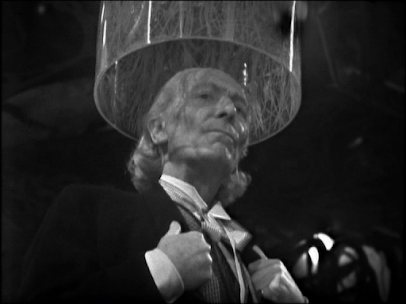 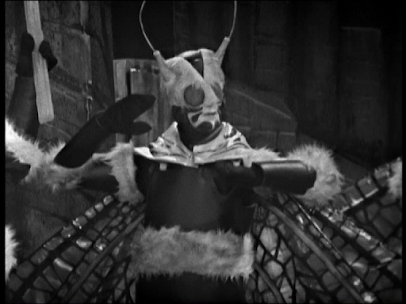 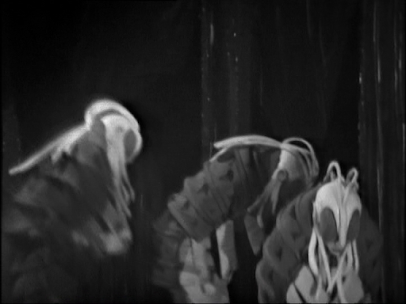 With episodes one and two we meet the giant ants called Zarbi, their weaponised larvae guns, and the human sized moths, the Menoptera. They're all obviously men in suits as they're all bi-pedal. The Zarbi were intended according to BBC notes to be a new monster for the Doctor, to supplement the Daleks, but really they're not very frightening, and incredibly dim where the Daleks are intelligent. They're really just the stooges for the Animus, who on first introduction is nicely conceived and subtly menacing. A perspex communicator tube descends from the ceiling over the Doctor's head, and then we have a soft, slightly sinister voice, wonderfully delivered by Catherine Fleming. Because it's not visual, it doesn't suffer from the problems of budget and resources that bedevil the other alien races. So it's a shame the production team ruin it all in episode 6 by showing us the Animus at the heart of its lair, which is a laughable creation that simply doesn't work. 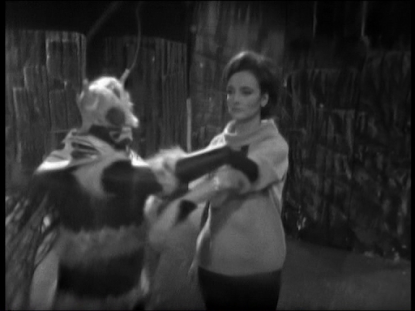 And this is the major problem that bedevils this enterprise. It's laudable to show that a planet would, just like here on Earth, not be monocultural and monoracial. Having two races, with about  a half dozen actors for each species, would be adventurous enough for 1965 Who's tight budget, tighter material resources for costumes and sets, and punishing shooting schedule (rehearse and shoot one episode per week). But on this show they attempt four races, plus the Animus, and a whole planet set supposedly chocked by a life-sucking web fittingly called the Carcinome. 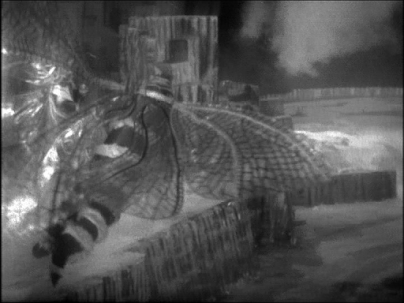 They simply don't have the resources! None of the species is particularly effective or believable, no matter what strange hand gestures and physical movements they give to the Menoptera (there's a special "insect movement" credit for this show). They're only really believable when seen briefly in flight (courtesy of Kirby wires). But the Zarbi just don't convince. The stress of rehearsing and filming then storing those costumes on a weekly basis for six weeks really takes its toll on the costumes. They very audibly creak whenever they move in the last episode, whilst the Menoptera's white fur is looking a little dirty and tatty and , pun intended, moth-eaten. 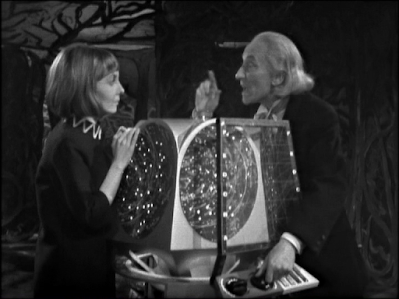 The planet sets are also not very convincing, special lenses or no. Too often the cast just walks up and then down a small part of the studio, and there's no sense of perspective. The Animus set, supposedly web-like, is anything but. It's clearly cardboard with lines painted on it. The planet-wide web is laughably bad, in fact some viewers might need to be told that tiny bit of web over the bottom half of the picture is it! 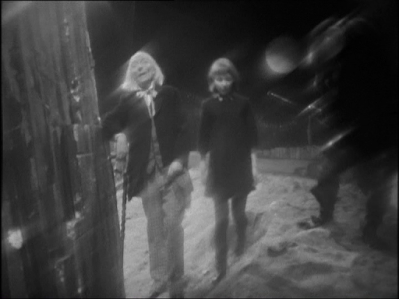 Least convincing of all are the underground dwelling Optera, like centipedes (see picture). Clearly these are humans standing upright with very cheap felt and foam suits. You can tell their two real hands and the vestigial centipede legs are just stuck-on felt. Again, they have  a strange movement, a hop and jump, and talk oddly. But they're not at all believable. They look nothing more than a very bad 60s Eastern European modern dance & mime act, in some awful East German TV show badly dubbed into English (the BBC used to show programmes like this in the 60s!). Or a bad Xmas panto special of Play School. In fact, it is incredibly kindergarten. 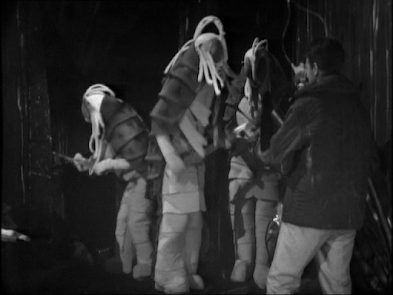 All this might be overlooked if the script was any good. But after two  episodes it just grinds to a halt, and the remaining four episodes constantly shift between Barbara and the Menoptera, Ian and the Optera, and the Doctor and Vicki captives of the Animus, without much excitement or plot development. The Doctor and Vicki escape once but are recaptured! And the final battle scenes are awful, nobody can really fight in those costumes! 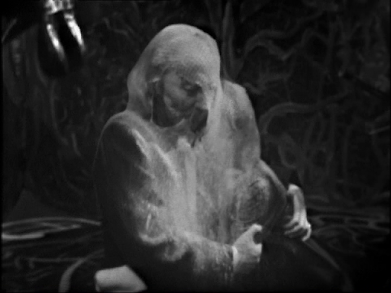 As for the acting, we can discount the aliens, as they're in unconvincing costumes and given strange speech patterns. So we only have the regulars (Barbara missing episode three as Jacqueline was on holiday, you can tell they're schoolteachers, they're always on holiday!). They do their usual weekly stalwart job but only Hartnell in episode one is really memorable. 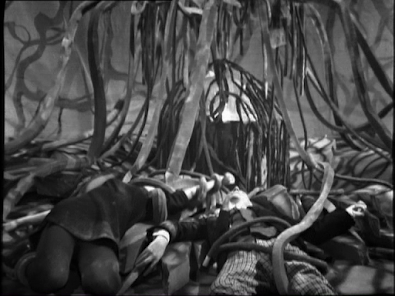 So in the end, a noble experiment that backfired. No longer would the production team attempt such a complex eco-system with multiple alien races, and I notice that special lens was quickly binned. With the departure of Carole as Susan, the show has stuttered badly. Next up in the show's plot rota would be a historical, perhaps the creative team would rally round and do their best. As for The Web Planet, it just looks slow and silly now. It proves something when the best thing is the one thing the BBC didn't make themselves, the stock use of music by French avant-garde musicians Les Sculptures Sonores, which is very good.
TARDIS rating: 2/5 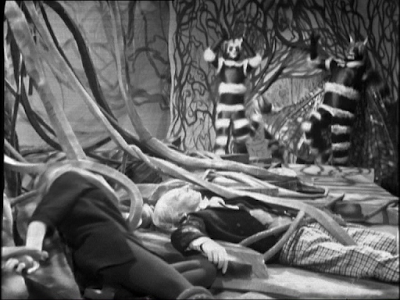 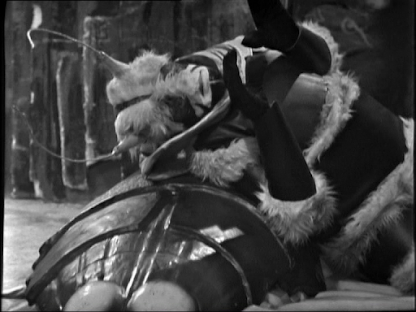 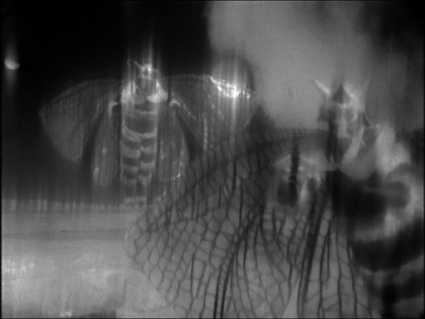